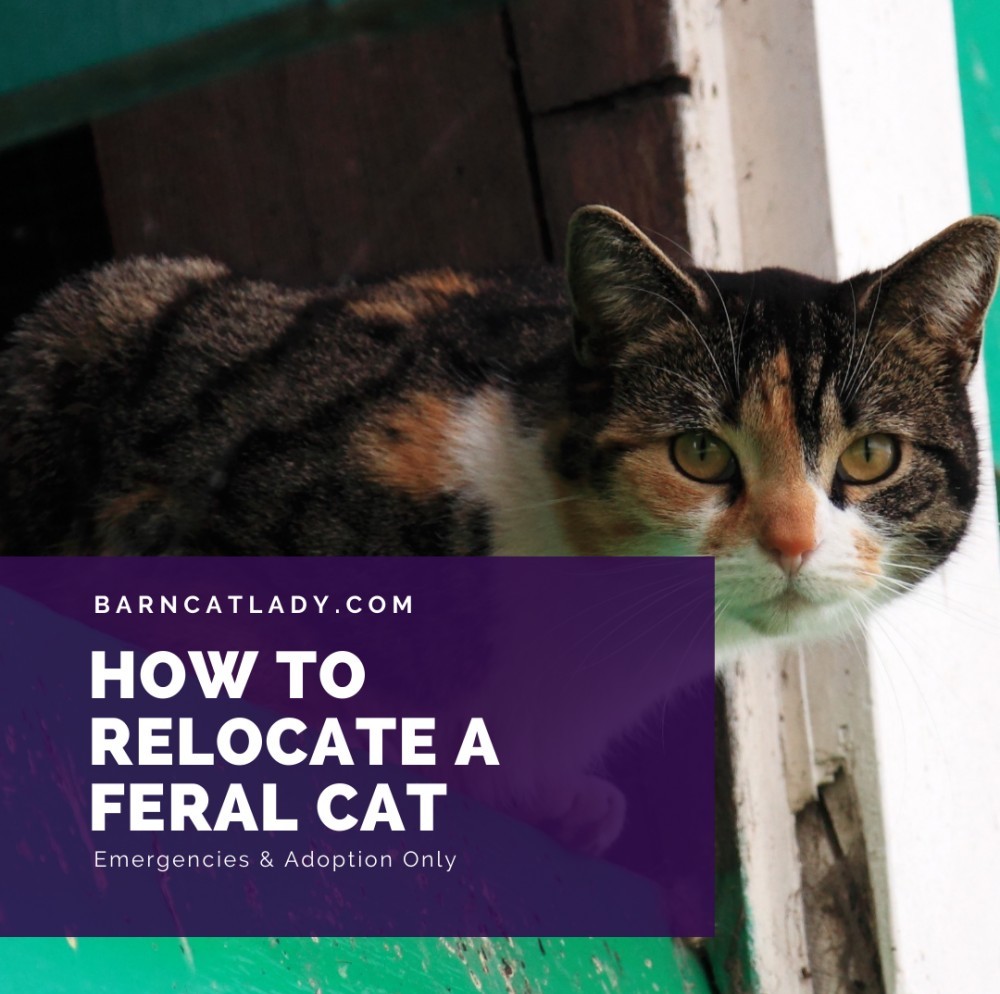 Most of the time, the relocation of feral cats is considered a no-no. Friendly cats and kittens can be safely removed, fostered, and adopted into homes. But the feral and semi-feral cats, you want to return them to their original home if at all possible after Trap-Neuter-Return (TNR).

In some cases though, especially if there is conflict with the property owners, finding a barn home (or another colony) is the only way to ensure their safety. We’ll discuss how to relocate a feral cat here, though this acclimation process can be applied to semi-feral and friendly community cats that fail indoor life as well.

If you are taking in a displaced cat from a community or feral cat rescue, please follow all acclimation procedures they ask of you. This guide is for those who don’t have a specific protocol for relocating a feral cat.

If you’re looking for a barn cat of your very own, please don’t take free kittens and put them outside. Please adopt from rescues and shelters who offer feral and semi-feral cats as working cats. They are spayed and neutered, vaccinated, AND usually free, in exchange for food, shelter, and care!

Disclaimer:  This post contains affiliate links.  I make a small commission on qualifying sales. See Affiliate Disclosure for details.  Thanks for supporting the kitties!

Relocation is the LAST Resort

Relocating outdoor cats should never be done lightly. It should ONLY be considered in the event of an emergency, such as property owners demanding the cat’s removal, or if their outdoor home is being destroyed by a new road or building construction, etc.

The reason Trap-Neuter-Return (TNR) advocates return the cats instead of taking them to farms and sanctuaries is for a few reasons.

One, too many cats, not enough barns, farms, sanctuaries able to take them in.

Two, if you remove all cats from an area, more cats just move in. Usually, these cats will be unfixed of course. Then because the area has so few cats, the reproduction rate of these cats rises.  So relocating does not solve the feral cat population issue. In fact, it makes it worse in some cases!

The third reason that relocating feral cats is avoided is that cats are territorial. Feral cats even more so because they are bonded to their home territory NOT people. This means relocating feral cats often fails. It is very common to have a cat leave his new home and attempt the very, very dangerous journey back to his original territory. Cats are often hurt or killed attempting this.

Another reason relocation often fails is because outdoor cats are NOT solitary creatures and are often tightly bonded to each other. They were born in that area, they grew up with their parents and siblings and other cats in the colony, and they form bonds with the other cats. They should be moved with a few members of their colony, if possible.

I know we all want to take a kitty and bring him to our farms or barns or warehouses and save them from busy roads and the mean, cruel people of the world, but you could be doing more harm than good. Relocating a feral cat could inadvertently cause the poor cat to meet an untimely demise attempting to cross unfamiliar terrain, such as highways and rural areas where coyotes roam, as they try to find their way back home. Cats do MUCH better surviving in their home territory than traveling around unfamiliar areas.

So decide carefully before you relocate that cat you feel sorry for. It works if you take the time to acclimate him to his new home, but it is NEVER, EVER guaranteed.

Step One: Trapping, Neutering, and Vetting

Unless you are adopting a working cat from a shelter or rescue, you may be trapping the cat to move him to your farm or colony. If that is the case, once you have your feral or not-so-feral cat trapped, you should make sure he is fixed and if he’s sick, get him healthy before moving him to a new location. This should include vaccinations and microchips if possible.

Trapping can be stressful on the kitties, especially if they are feral. Since you already have him captured, it just makes sense to get him fixed and evaluated while under sedation or anesthesia.

Wherever the new outdoor home is going to be, you need to have a place to confine the cat. This can be a tack room in your barn, a kitted out gardening shed, or even a pet cage like you would find at the shelters. Ideally, you would have a feral cat den so the cat can hide in it and you can close it up for the safety of you and the cat to clean the cage or move him, if the cat is feral. If you don’t have one (or can’t afford one), you will probably want to cover all or part of the cage to ensure he doesn’t feel exposed. Especially if the kitty is terrified.

The confinement period will mean that you will need a litter box and food dishes. Maybe a cat cave if you are confining them in a tack room or similar. Scared cats love to hide, so provide a covered cage area or cat caves, or even a sideways Rubbermaid tote.

The length of time you have to confine to the cat will depend on his level of socialization. Friendly cats need around two weeks as they more easily bond to you in their new home. Feral cats, however, need around 4 weeks. I tend to err on the side of caution and it is better to confine for a tad longer, than too short a period of time.

Always follow the acclimation process from the rescue you adopt a cat from, however. Every group has similar protocols about confinement and it might vary from my advice here, but you always want to follow their suggestions.

You do not want to confine the feral cats much longer than this as it can cause him undue stress that can cause health issues.

During the confinement period, you want to get the cat used to you as his new caregiver. Get him used to your voice, pet him if he’s friendly, and bring him yummy food on a schedule you plan to feed him once he is released.

You also want to be sure the kitty can see and smell his new home. If you’re relocating a pair of cats from a colony, please confine them in the same area (together if possible!), so they have company and companionship. Domestic cats may be solitary hunters and independent, but they are social animals more.

Bonding With the New Kitty

You absolutely want to take the time to bond with the new kitty during their confinement period. These is typical bonding exercises for all cats, pets or not. 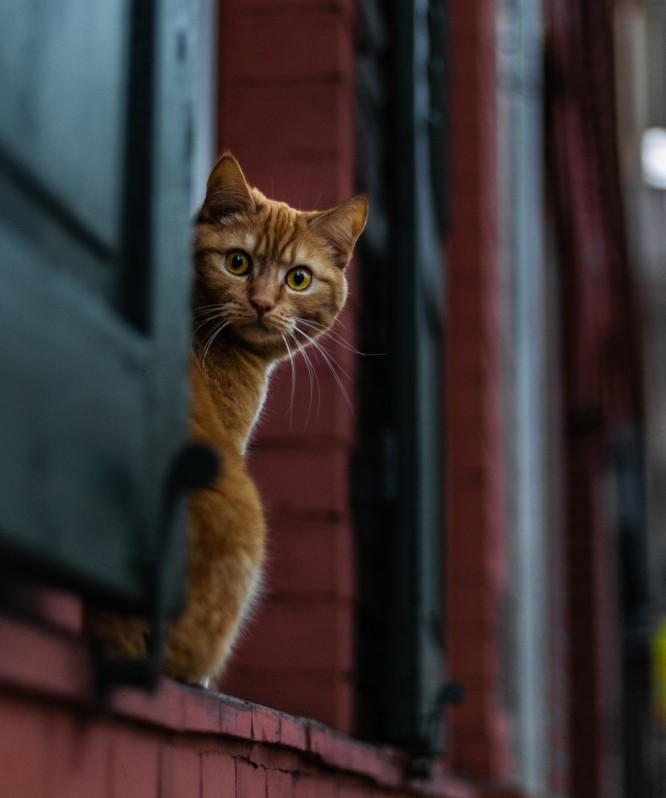 After the confinement period is over, you will want to open the confinement areas and allow the cat to come out on his own. Do this as quietly and calmly as possible while the cats are learning to explore the new area. Leave the area open as a kind of ‘safe spot’ for the cat to retreat to if he feels threatened or too scared.

Leave the area exactly like it is for the cats to have room to hide in there until all the cats are adjusted to the new home. This can take a few days. If feral, they may avoid you except for feeding, but once the cats aren’t running scared back to their ‘safe spot’ and are found sleeping or relaxing in other areas.

Remember: Only Relocate in Emergencies!

Locating feral and semi-feral cats is not always successful. Simply do the best you can to get the cat used to the area with confinement and a slow-release.

Get the cats used to you as their new caretaker by talking to them, feeding them, and playing or petting them, if possible. Ferals can even start to trust you to an extent, eventually.

Feral cats need love too! Feeding, clean water, shelter, and care should be provided to any animal under your care, which does include barn cats. Even feral barn cats deserve it.

Any questions or if you need advice on acclimating your new barn cat or working cat, feel free to leave a comment below and I’ll happily respond!

78 thoughts on “How to Relocate a Feral Cat”