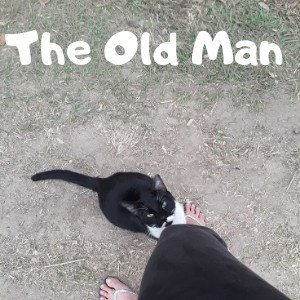 I’d like you to meet one of my permanent colony cats, the Old Man. As a beautiful black and white tuxedo kitty, he had been an ear-tipped TNR barn cat before I even met him. He’s been with me for around 2 years now. Here’s his story!

I met the Old Man at the former training center while it was closing down. I was in the middle of trying to save all the cats left behind during this mess, which you can read about on my About page.

When I first met the Old Man, he was kind of skinny, he was loud, and he wouldn’t let me pet him at first. He was hungry. He was scared. He doesn’t trust people at all.

During this time, I was trying to feed them all and didn’t have time to work with him.

I didn’t have the time nor was I planning on taking him with me.  He was just another cat I was trying to find a placement for in another barn, another training center, or a garden, anything. I liked him. I like all cats. But I was trying not to get too attached.

See, at first, I didn’t name these cats. I felt if I named them, then it would make me love them. Then, if something happened to them outside, it would hurt so much. I knew the chance of them dying young was much higher living outdoors, even if they DO live in a barn.

Old Man ended up being relocated to the new training center. I met him again there a few months later.

I relocated to the new training center, relieved I wouldn’t have to go broke feeding 40+ cats anymore. I arrived with my two cats and Handsome.

One day, I was returning from the barn I worked in over to the small studio in a different barn and I heard meows. If you could call it that.

Of course, I couldn’t ignore meows. So I started looking around and found him under a bush, hiding. He didn’t look good. He heard me, somehow. Recognized me. Of course, I immediately fed him. I talked to him. He wouldn’t get close to me, though.

It took a couple of days, but he eventually followed me back to the barn. This was not on purpose, by the way. I wasn’t looking to gather another colony around my barn. But I felt so bad for him. He was scraggly, his hair thinning, and skinny. When I realized he moved into my barn, of course, I continued to feed him and gain his trust.

I started calling him the Old Man based on his scraggly appearance, though I honestly have no idea how old he is. At least 5 or 8, I would guess.

This was back before I named my fosters or colony cats, remember. I always felt it would keep me from getting attached. However, after so many cats and so many cats disappeared or found homes over the years, I learned it doesn’t matter if I name them or not. It still hurts and I still miss them.

In any case, I started feeding him dry and wet food. I gave him Revolution, worried his thinning fur was from mange or scratching at fleas. I dewormed him.

A month goes by and he’s looking so much better, although his fur was still a bit funky. It wasn’t until Peabody, who I had been fostering, developed ringworm that I realized what was wrong with the Old Man. Adult cats don’t always have obvious symptoms of ringworm, though the Old Man did. If I had known what to look for.

However, with regular food, water, and deworming, he was recovering all on his own. Cats often fight off ringworm infections on their own, unless they’re super young or super old or immune-compromised.

The Old Man loves me. I’m the only human being he trusts. He will follow me all around the barns, especially if people are not around. He is also healthy and happy! He’s even happier when he is allowed inside.

I have considered trying to find him a home, where he can be safe and loved like he so desperately wants. However, he has lived his whole life in the barns. He doesn’t want to use a litter box. He’s potty trained, in the meaning that he wants to go outside to do his business, not go in some box inside. And some days, he doesn’t want to come inside. He just wants me.

So he’s now a lifelong resident of my colony, however old he is. He’s well-fed and loved and given attention when he’s craving it. He’s happy and healthy.

What more can we ask for than that?

4 thoughts on “The Old Man of the Barn”