Skip to content
Home » Cat Information » Lysine and Cats: Why It is Not Recommended 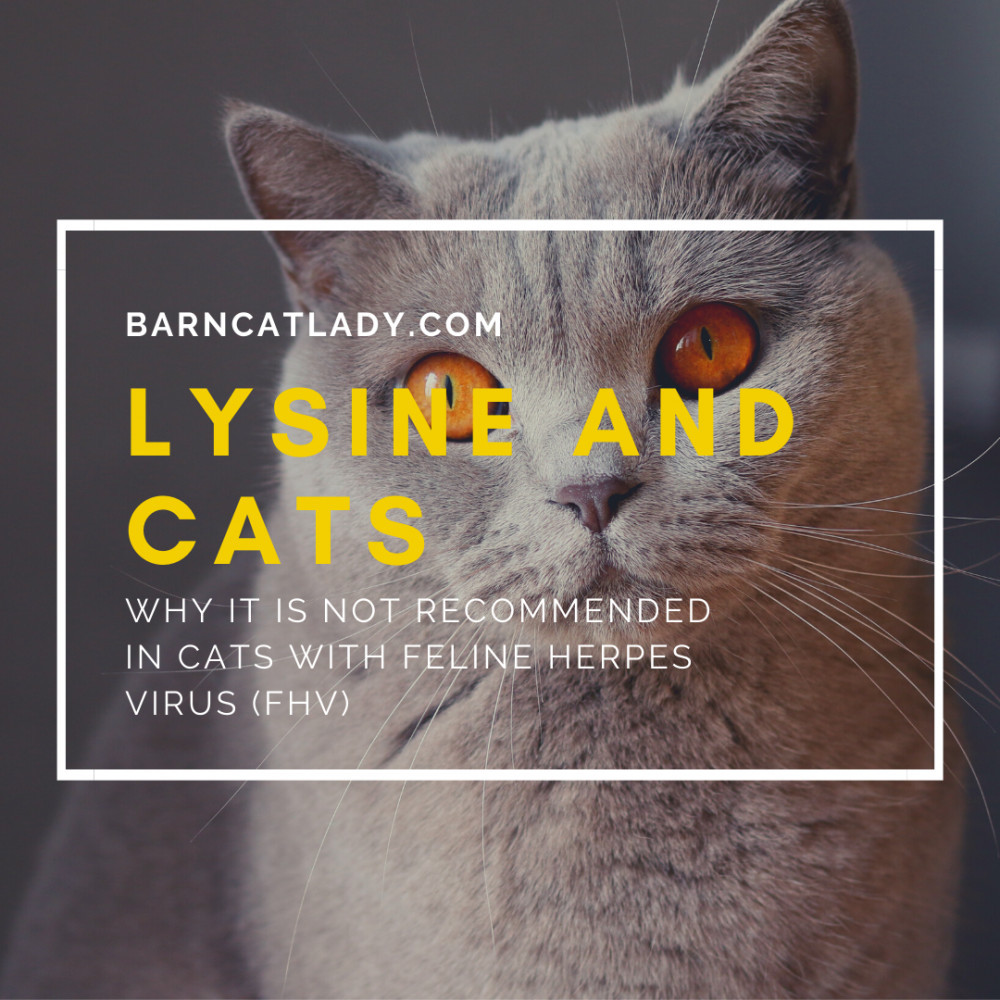 I get asked a lot about lysine supplements for upper respiratory infections in cats.  Lysine and cats seem to come up quite often when discussing a sick cat, in a community cat colony or a home!

Many cat caretakers, shelters, sanctuaries, and vets have recommended lysine supplementation in cats who have Feline Herpes Virus (FHV), a type of feline upper respiratory infection.

I do NOT recommend it for the use of controlling FHV. Why? Because it doesn’t actually work and evidence suggests it makes things worse! Read on for my reasoning!

Disclaimer: I am not a veterinarian and this does not constitute veterinarian advice. Please contact your veterinarian for any health concerns you have for your cats. I simply use my experience and research to help educate cat lovers, feral cat caretakers, and rescuers.

Disclaimer:  This post contains affiliate links.  This simply means I will earn a small commission on qualifying sales at no cost to you.  Read Affiliate Disclosure for full details.  Thanks for supporting the kitties!

Lysine is an important amino acid that must be obtained through diet as neither your body nor your cat’s body will make its own lysine. It is used the biosynthesis in proteins. It is also important for normal growth and muscle turnover, and to build carnitine, a substance found in most of your cells!

Now, I’m not going to go TOO technical here, but a quick rundown of what it is might be useful for you.

A lack of lysine can also cause some health issues in humans (and cats!) like defective connective tissues, impaired fatty acid metabolism, and more. Too much lysine, caused by ineffective catabolism, and you can have neurological issues.

For the purpose of supplementing lysine to help with Feline Herpes Virus (as well as human’s herpes simplex virus (HSV)), it is SUPPOSED to work by limiting arginine, another amino acid. HSV (human herpes) is actually richer in arginine and poorer in lysine, and thus lysine supplementation was tried to help control HSV and later, FHV (feline herpes).

Let’s state this plainly:  Lysine is NOT a supplement for immune support.  It is supposed to be a supplement to fight off the feline herpes virus by reducing arginine.

To be clear, human herpes and feline herpes are NOT the same virus. But they are similar to each other.

Now arginine, in humans, is considered a semi-essential amino acid and can be synthesized by your healthy body. No need to supplement it.

However, cats CANNOT synthesize their own arginine. They MUST get this amino acid through their diet. It is considered an essential amino acid for them. It has been suggested that using lysine to reduce arginine (if it works) can be very dangerous for our feline friends.

Cats are HIGHLY sensitive to arginine deficiency! Arginine is very important to detoxify ammonia, which results from the breakdown of proteins. It also has an important function in the urea cycle. According to WikiVet, “feeding a diet that has no arginine but contains substantial levels of other amino acids can result in death within a few hours.” 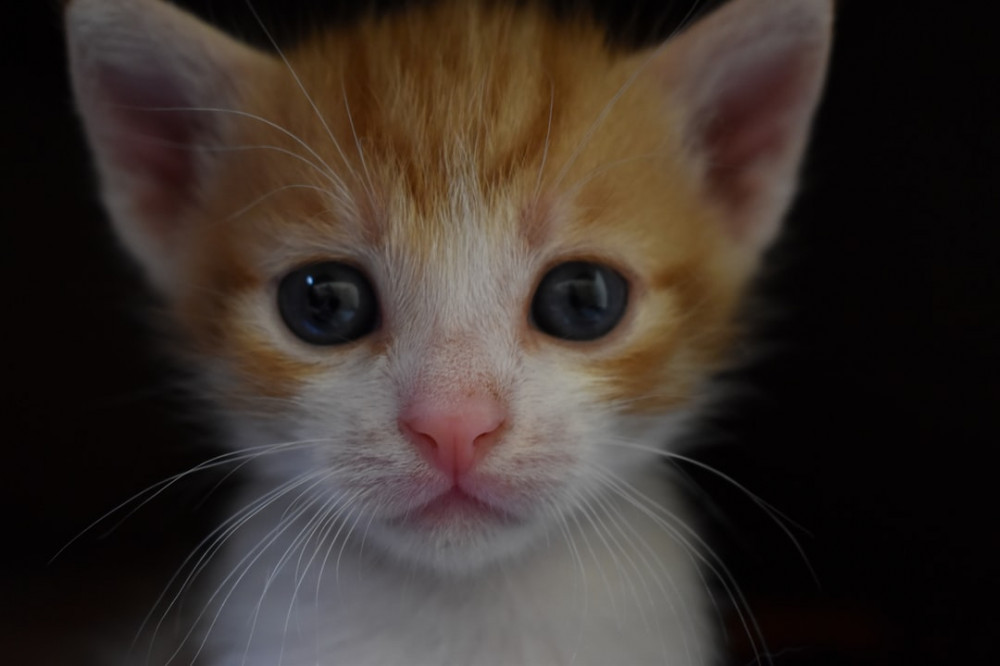 Lysine does NOT have antiviral properties and will not improve a cat’s immune system, as I stated previously.  Even if it were effective on the feline herpes virus, it would not work on the various caliciviruses or feline chlamydia or other upper respiratory infection agents.

To put it simply, lysine and arginine use the same intracellular transporter system and thus too much of one may affect the metabolism of the other. Notice that I said MAY affect the other. It is a theory.

So far, I have not found any studies that actually state the arginine is reduced in medical studies. The levels of lysine in the blood increase, but that doesn’t mean levels of arginine decrease throughout the body. 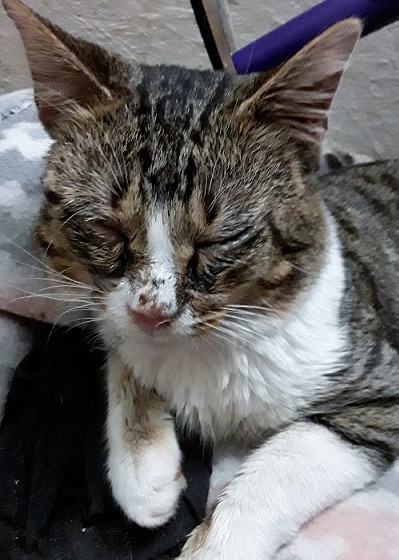 The feline herpes virus is one of two types of viruses that cause most of the upper respiratory infections in cats. It is not as common as calicivirus, but it does account for a large percentage.

FHV and other upper respiratory infections cause sneezing, congestion, runny or inflamed eyes, coughing, or other symptoms like fever, pneumonia and in some cases, death.

What separates FHV from calicivirus is that once a cat has contracted FHV, that cat will be infected for life and have occasional reoccurrence of upper respiratory symptoms. Just like human herpes, sometimes the cat shows symptoms, sometimes they don’t, basically. They are also infected for their entire life and occasionally shedding the virus, thus are contagious to other cats.

Calicivirus on the other hand usually gets the cat sick one time, though they may end up infected for months, years, or their entire life.  Sometimes they may even shed the calicivirus and thus be contagious to other cats.

Just like other herpes viruses, the feline herpes virus is high in arginine. Thus, the theory that supplementing with lysine will reduce arginine and subsequently reduce herpes symptoms, how frequently it happens, and virus shedding, which can infect other cats.

Studies on Lysine and Cats

There are numerous studies that have actually proved that lysine supplementation does NOT prevent or help treat feline herpes virus.

Some studies have actually reported an INCREASE frequency of FHV episodes and virus shedding when cats are supplemented with lysine.

In case you’re wondering, it also not effective for preventing cold sores or other herpes symptoms in humans either!

There are many studies published that have proved that lysine supplementation is completely ineffective in FHV cats and/or INCREASED virus shedding and symptoms.

Here are a couple:

PubMed: Study of Effects of Dietary Lysine Supplementation on Infectious Organisms in Cats in a Shelter

In fact, only ONE study noted that it helped cats with conjunctivitis symptoms from the herpes virus, but that was a seriously small study of EIGHT (8) cats. That’s 4 cats treated with lysine and 4 cats in the control group to compare the two.

There’s a veterinarian article discussing both points of view about lysine, so you can make your own decision.

Though, if you’re still interested in trying lysine supplements for your cats, you can find some on Amazon or Chewy.

Do I Recommend Lysine Supplementation for FHV? No

Lysine has no antiviral properties. It cannot even be proven it limits arginine. If it DOES limit arginine, that could be dangerous in cats, as they do not produce their own. There have been studies of it proving it actually made symptoms and viral shedding worse!

The only reason lysine was recommended in the first place was based on a HUMAN study on the herpes simplex virus. And just to say, there is no evidence it reduces cold sores either.

I know vets, shelters, and rescues do recommend it. I don’t.

So no, I don’t use lysine supplements nor do I recommend them for people caring for cats with upper respiratory infections.

What Does Help a Cat’s Immune System?

Let’s be clear, lysine was only suggested for use in feline herpes virus NOT immune system response, despite the numerous products that claim it helps a cat’s immune systems.

In my outdoor cat food post, I recommend the best food you can afford for outdoor cats.  This is still true.  Bad food is still better than NO food, definitely.  That being said, the better the food, the healthier the cats!  So my first recommendation is to save the money you spend on lysine supplements and buy your cats better food!

Another suggestion is probiotics!  There has been some early evidence that probiotics help your overall immune system, not just your gut!  It is suggested that it does the exact same thing in cats!

Another suggestion is that arginine supplements actually INCREASE immune system responses in cats!  That’s the same amino acid that lysine is supposed to reduce!  (Though no evidence shows it does reduce arginine in cats). Another possibility is supplementing with salmon oil as the results are promising for that as well.

My last suggestion for boosting a cat’s immune system is reducing stress!  Stress is a key factor in the reoccurrence of the feline herpes virus as well!

Have you used lysine for FHV? Do you think it helped? Or not? Leave me a comment!

58 thoughts on “Lysine and Cats: Why It is Not Recommended”