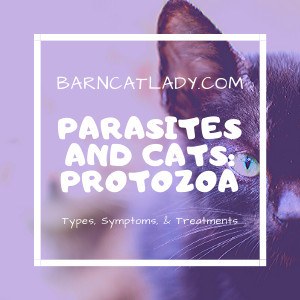 There are many types of internal parasites that cats can get and not all of them are worms. Protozoa parasites and cats infected by them are also common. Have you heard of coccidia? Giardia? Toxoplasmosis? These common parasites are all single-celled protozoan parasites that infect cats and other animals.

You won’t be able to see these parasites as you can sometimes see roundworms or tapeworms. Protozoa are microscopic single-celled animals, such as the well-known amoeba. However, we’re going to be discussing the parasitic protozoa that cats can be infected with.

Disclaimer: It is always best to take your cat into the vet as soon as you notice any changes to a cat’s poop. I am not a veterinarian and I cannot diagnose your cat. This post is for informational purposes only and is specially written for caretakers of feral cats, who may not be able to take the cats to a veterinarian.

Disclaimer: This post contains affiliate links. This simply means I earn a small commission from qualifying purchases at no cost to you. Read Affiliate Disclosure for more details. Thanks for supporting the kitties!

Cats contract coccidia by ingesting an oocyst, which is a thick-walled egg-like stage in the life cycle of coccidia. Ingestion occurs from contaminated fecal matter. This can occur with a fecal-contaminated environment or soil.

These oocysts can be infective within 6 hours of being excreted in feces. Or it can take a few days for these oocysts to become infective.

Cats may also become infected by eating flies or cockroaches or mice that carry coccidia oocysts. That means even solitary indoor-only cats can become infected with coccidia.

Coccidia infections usually cause no problems in adult cats but can cause serious illness in kittens. Coccidia can destroy the lining of the intestines and cause mucusy or watery diarrhea, which can be dangerous or even fatal in kittens.

Serious infections can occur because of overcrowding, such as in catteries and shelters. Good sanitation and hygiene help control coccidia infections.

Diagnosis relies on observing the microscopic cysts in cat feces. A clear fecal test does not indicate a cured infection as the shedding of cysts isn’t continuous. For the less common species of coccidia, a blood test might be performed.

Cats are easily infected from their environment, so it is important to practice good hygiene.

Oocysts do not become infective above 104 F or below 68 F. They become infective rapidly at 86-98 F. The oocysts are quite hardy and can survive for over a year in moist, protected environments as long as they aren’t exposed to freezing or extreme heat.

As for community cats and feral cats, there is no way to prevent infection as you cannot control their environment. Adult cats infected with coccidia usually have little to no symptoms and the infection will resolve on its own thanks to a cat’s immune system. 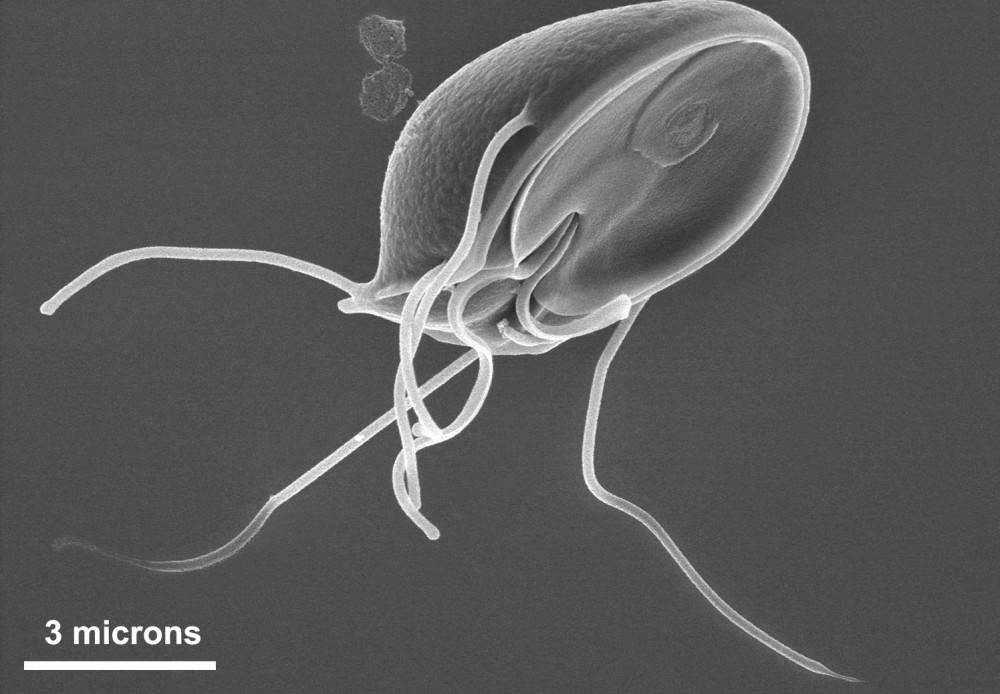 Giardia (Giardia duodenalis) are one-celled organisms that cause giardiasis. These little protozoa move around with a whip-like ‘tail’ and infect the small intestine of cats and other animals. Giardia is found worldwide and is comprised of many types. Some infect a wide range of animals and some infect only specific species. Giardia is the common cause of ‘Traveler’s Diarrhea’ in people.

While rare, it is possible to contract Giardia from your cat.

This parasitic infection occurs in less than 5% of cats, according to Cornell University. Some environments can cause infection rates to be much higher, such as multi-cat homes and breeding catteries. Infection is greater in cats less than a year old.

Cats can get Giardia by ingesting the cysts in feces of another infected cat, either directly or indirectly. Cats can contract Giardia through the litter box, animal crates, and cages, rolling around in contaminated soil, or drinking contaminated water.

Diagnosis relies on fecal tests done at a veterinarian. Giardia may be underdiagnosed because the shedding of cysts can be inconsistent in feces.

Practice good hygiene practices are a must.

In community or feral cats, you cannot prevent Giardia. 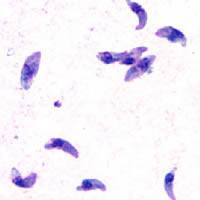 Toxoplasmosa gondii is the single-celled organism that causes Toxoplasmosis. T. gondii’s definitive hosts are felines, both wild and domestic. That means that T. gondii requires cats and wild felines to complete its life cycle.

Despite popular rumors, domestic cats are not the only source of T. gondii. Mountain lions, jaguars, lions, cheetahs, and other wild feline species are also hosts to this parasite.

Infection by T. gondii is actually very common for cats, but it very rarely causes disease. Kittens and immunosuppressed adult cats are susceptible to illness.

Cats usually develop an immunity to T. gondii after infection. This means that an infected cat only sheds oocysts in feces for a short period and only once after infection.

It is estimated that only 1% of cats are actively shedding oocysts in their feces.

Most humans rarely get ill from Toxoplasmosis unless pregnant or immunocompromised.

Only approximately 11% of people in the US between the ages of 6 and 49 have contracted toxoplasmosis according to antibody studies, according to the Companion Animal Parasite Council. This is despite how common pet cats are in the US. Other countries, such as Turkey, have a higher prevalence.

Cats contract T. gondii by ingesting any of the 3 infective stages of this organism.

The most common way a cat becomes infected is by eating infected tissue cysts in prey or other raw meat.

T. gondii multiplies in the small intestine of cats and the oocysts (a thick-walled egg-like stage) are excreted in poo. These oocysts become infective in about 1-5 days. That means that poop sitting in your litter box can go on to infect other cats (or you) after a day or five.

This highlights the importance of daily litter box cleaning! Coccidia is not immediately infective (it can take 6 hours or a few days for coccidia oocysts to become infective), so scoop that box often, y’all! I recommend multiple times daily, especially if you have multiple cats.

Another important fact is T. gondii oocysts are VERY hardy. They can survive in the environment for well over a year! They are also resistant to disinfectants, although cleaning with scalding water is effective. But dangerous. Get disposable litter trays when introducing a new cat.

Kittens can be born with T. gondii infection because it can pass through the placenta.

Toxoplasmosis can also cause birth defects and fetal death.

The diagnosis relies on laboratory tests.

There is no FDA-approved treatment for toxoplasmosis in cats or dogs.

For community cats, there is no prevention as they live outside and often eat their prey.

To prevent infection for you and your family:

Handling your cat is perfectly safe and unlikely to infect you. Cats are excellent groomers and it is seriously unlikely that cats would leave feces on their fur for very long. Since oocysts become infective in feces after 1-5 days, the risk of infection from petting your cat is very low. 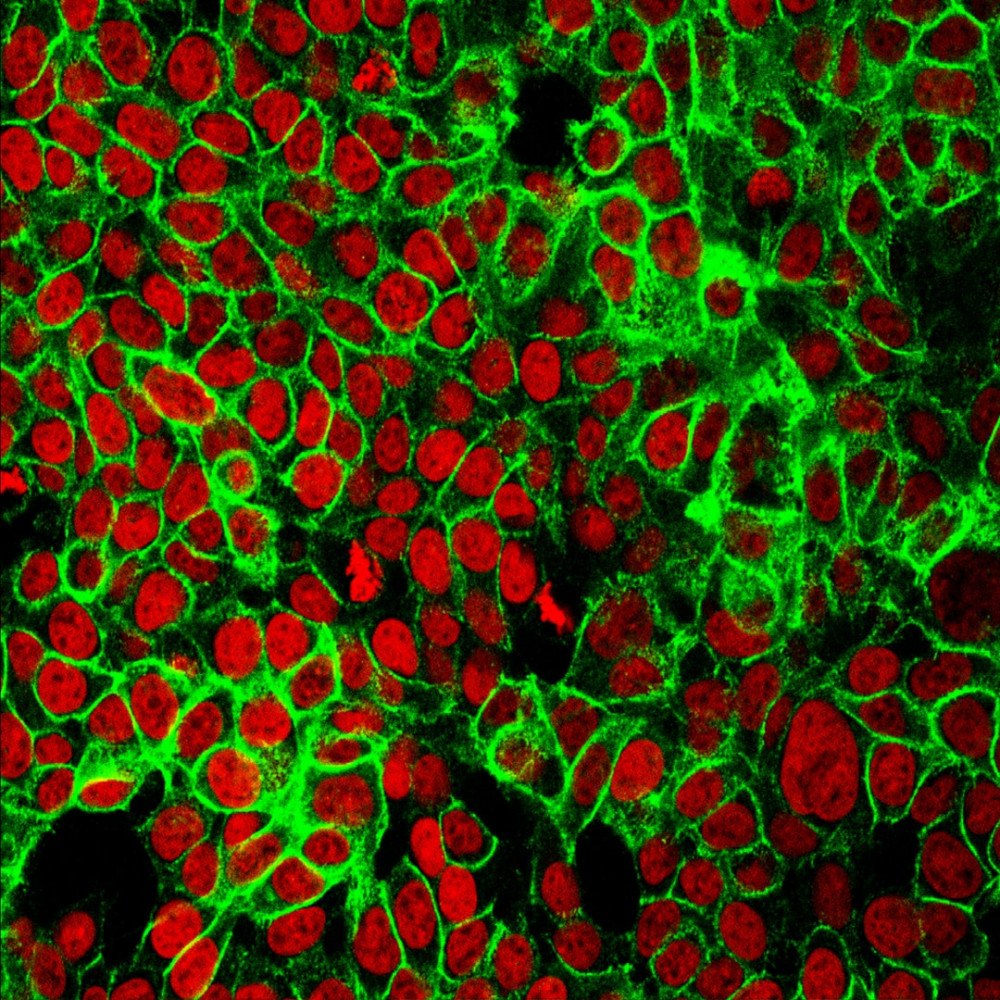 There are a few other single-celled parasites that cats can get, but they are much rarer.

Amebiasis is an infection caused by an amoeba, which is a type of protozoa. Amebiasis is caused by Entamoeba histolytica. This fun amoeba lives in the large intestines usually, but can infect other organs and even the genitals!

Amebiasis primarily affects humans as people are this amoeba’s natural host. However, sometimes cats, dogs, and other mammals can contract it after eating food or water contaminated by feces that contain E. histolytica cysts.

People can infect their pets if they have this illness and your pet drinks out of the toilet or other scenarios where your pet comes into contact with your poop.

This disease is more common in tropical and subtropical areas.

These symptoms may be persistent or intermittent.

An examination of fecal matter is usually required to detect this infection, although sometimes diagnosis can be difficult. If that happens, colonoscopy and biopsy of ulcerations in the intestines may be required.

Cryptosporidiosis is another protozoan infection that is actually very common in cats, dogs, and even humans! Studies of cats for antibodies for this disease indicate that anywhere from 20%-50% of cats contract this illness, according to the Companion Animal Parasite Council.

Cryptosporidiosis is similar to coccidia in the infection behavior of these little parasites. It infects the small intestines and other organs.

Cryptosporidiosis is contracted by ingesting fecal matter that carries the oocysts (egg-like stage) of this little bug. This means cats (and humans) can contract this illness from fecal-contaminated environments, water, food, etc.

It is also very resistant to most disinfectants, including the chlorine in swimming pools and drinking water. They can survive in the environment for extended periods of time.

Cryptosporidium sp. ARE susceptible to commercial formulations of ammonia and temperatures of over 158 F.

Diagnosis can be difficult. It requires samples to be sent to specific laboratories.

Cytauxzoonosis is a life-threatening, tick-borne disease of cats that is caused by the protozoa Cytauzoon felis. It was discovered in the Mid-1970s in Missouri and its distribution has been expanding across the United States. The protozoa C. felis attacks blood cells.

Cats contract Cytauxzoonosis from the bite of a lone star tick (Amblyomma americanum). Because of that, the illness usually starts between March through September, which correlates to tick season.

When first observed, C. felis caused death in nearly 100% of the time in domestic felines. Since then, there have been rare reports of cats who survived without treatment, although it is not certain why.

Routine application of flea and tick preventative, although transmission is still possible. The best way to keep your cat safe is to keep him or her indoors. 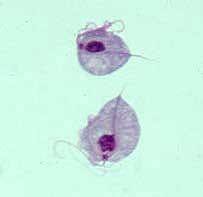 Trichomoniasis is a protozoan parasitic disease prevalent in cattle and cats.  It is also a human venereal disease! There are many different species of this fun parasite, but the cat one is not sexually transmitted.

It inhabits the large intestine in cats and causes diarrhea. The full life cycle is unknown.

It is most likely caught by ingesting contaminated fecal matter. This can occur from the environment, sharing a litter box, etc.

There is no FDA-approved treatment for this disease.

Please remember the only way to tell exactly what is causing a cat’s diarrhea is to take them into the vet.

Unfortunately, this might not be feasible with feral and community cats. Many of the protozoa infection are self-limiting or may clear up on their own. If regular deworming protocols have not stopped diarrhea issues, then it is time to call your veterinarian.

There are many issues that cause a cat’s poo to be soft or runny, and parasites are only a few of those causes.

Have you had a protozoan infection in your cat? Tell me your story below!

6 thoughts on “Parasites and Cats: Protozoa”