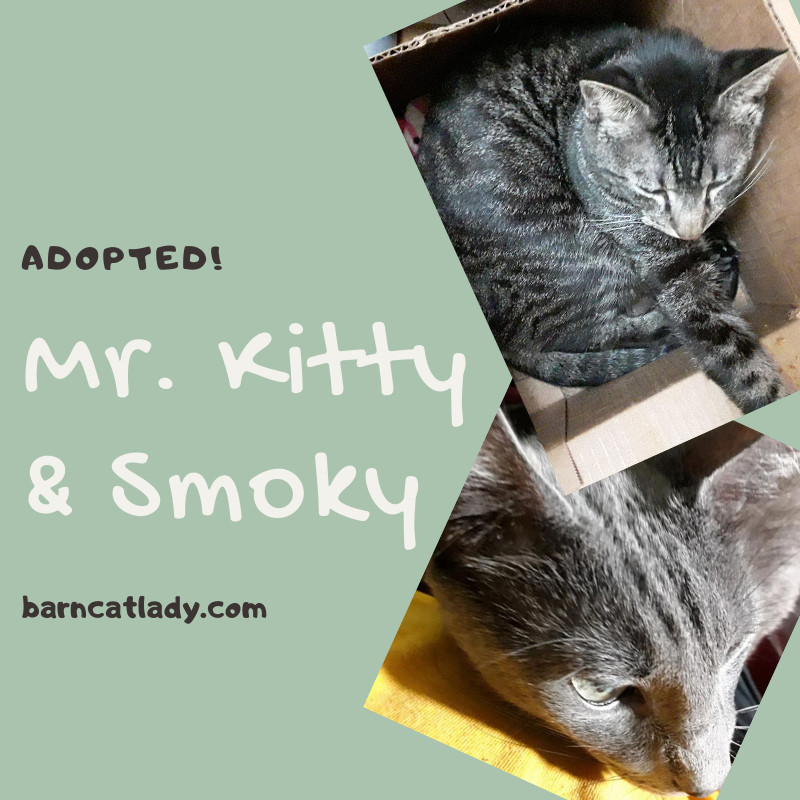 During the summer of 2019, I took on two adult indoor cats as fosters. These large kitty cats were Mr. Kitty, a dark gray and black tabby cat, and Smoky, a solid gray cat. They were 4-years-old.

Lifelong indoor-only pets, these two big boys have lived together their entire lives.

Unlike most of my fosters that fall into my lap while working at the barns, these two have a different story.

Their original owner, a young woman in her early twenties, had lost her home. Her boyfriend had lost his job. She had to move in with family who would not allow her to bring her cats inside. She had them in a large dog crate outside while she attempted to find a home or a foster for them immediately.

It was 90 degrees outside and with the high humidity in Louisiana, this was not safe for the cats. I have also been in a situation where I lost my job, was homeless and had cats, so I felt really sorry for the girl. No one would help me keep my cats. So I wanted to help someone else in the same situation at least keep their babies.

I offered to take them temporarily until she could find a new home or find something more permanent. It was supposed to be 3 weeks. They arrived at my small home at the barns; both were slightly overweight, very big, and scared.

I kept in contact with their owner for a couple months, giving her updates and just letting her have time to situate her life. Mr. Kitty and Smoky were both already fixed, which was unusual for rural Louisiana, so I knew she was at least trying to be a responsible pet owner.

I offered to let her come visit them, which she never ending up doing. After three months, I stopped hearing back from her. After four months, I started leaving her messages asking what her plan was for these two lovely boys as I definitely couldn’t keep them forever! After five months, I left her a message telling her I was going to have to find homes for them.

I never heard back from her.

So that is what I did.

Mr. Kitty is in Charge 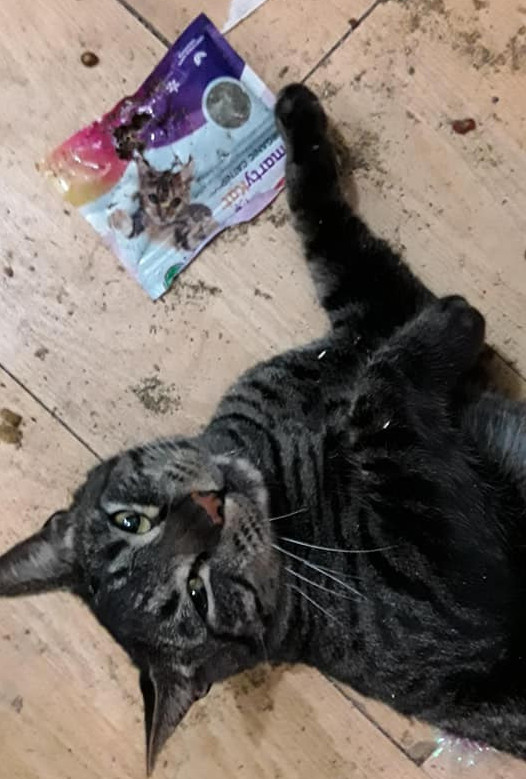 Mr. Kitty is a very dark tabby cat, probably close to 15 pounds, who likes to observe his surroundings from very high. First thing he did when I released him from his large carrier was jump on top of the wardrobe and stayed there safely as he watched the rest of the cats for a few hours.

Mr. Kitty may have been scared, but he didn’t act it much. He let me love on him immediately after he came down from his throne. Gave me a regal head butt to my hand.

This large, gray tabby also took no crap from anyone and he insisted on dominating all the other cats. Including his brother, Smoky. He would bite the back of Smoky’s neck and mount him in a display of dominance. This dominance display is a male cat behavior that is usually resolved after neutering, but as proved by Mr. Kitty, not always.

He was large and overweight (a little) when he arrived. This is largely a result of their original owner’s food choice, I believe. She fed the Walmart’s Special Kitty brand dry food only, which is FULL of fillers like grains and corn. He slimmed down quite a bit while with me, as I feed both wet and dry food, though my brand is not top of the line. (When you feed community cats, you can’t AFFORD top of the line!)

Mr. Kitty also was a bit of a bully and would mess with cats who reacted to his bullying. But he allowed kittens to crawl all over him and he even gave them baths during marathon grooming sessions.

He is a good cat, despite his bullying tendencies and his catnip addiction!

Smoky is also a very large (15 pounds!) gray cat. He looks like a Russian Blue, to be honest. I am uncertain if he has any pedigree in him, or if he is your average domestic short hair cat. He is still gorgeous!

Just like Mr. Kitty, Smoky arrived a bit overweight. He also slimmed down after the food chance.

What is interesting is these two large cats are not related by blood, though I call them brothers simply because they have been together nearly their entire lives. But they are not from the same litter. So it is interesting to me that they both got so large.

Smoky, I had been told, had been abused as a kitten. He was very bonded to his original owner and he displayed this behavior by calling out at night. It broke my heart. He would yowl at the door every night for weeks. He was friendly from the moment he arrived, though, and didn’t hide. He just cried.

He eventually settled into life in my small apartment, though. He was the lap cat of the two ‘brothers’. He would purposely head butt you for attention.

Smoky also learned to be a bully to cats who get upset by it, unfortunately. Mr. Kitty would bully Smoky occasionally, but Smoky eventually realized he could bully others now!

Smoky LOVES catnip mice and little toy poof balls.  He spent hours playing with them. Such a sweetheart of a cat!

I ended up having them for 6 months. I loved these two large, crazy, bully cats.

They had been lifelong indoor-only cats. Their original owner, before losing her home and everything else that happened to her, was very responsible at their care at first. She kept them indoors. She got them both fixed. This is rare here in rural Louisiana and a huge part of why I agreed to foster them.

She was young and had fallen on hard times and I don’t hold any judgment towards her for this, even if she disappeared on me. I honestly think she was just avoiding it as she still couldn’t care for them.

But I had a problem now. I couldn’t let these lifelong, friendly cats become barn cats! That is NEVER a good idea. Any cat that can be indoor-only pets should ALWAYS be indoor-only pets with a home. (Never stick kittens or adopt friendly pets as barn cats! Always adopt feral cats or community cats who need a new outdoor home for the barns.)

So I started posting these two brothers online once the owner failed to respond to my numerous messages.

I actually didn’t have a lot of interest in 4-year-old large cats, for some reason, despite how beautiful and friendly they are. However, a couple have been looking for a large cat for a very long time and had seen my post in one of our local cat Facebook Group.

She was so excited, she joined the group and while awaiting approval, she had a friend comment on my post asking if they were still available. She also posted on my FB profile asking about these two guys.

She was so happy they were still available, she messaged me early the next day with her contact information and she came out to see them immediately, with friends!

In fact, she was so excited, she had decided before she met them she was taking them home. Her husband claimed Mr. Kitty immediately once they met them. Both cats were lovable and cute while meeting their new parents in a tack room here at the barns. They responded to the casual interview and the cat meeting in all the right ways. They took them home that day.

Mr. Kitty and Smoky were going to have a great family. The wife friended me on Facebook, sent me pictures of Mr. Kitty after arriving home. They are going to be so loved!

I am so very happy that these two found a couple to love them. It’s amazing these two were specifically looking for large cats to adopt! I have a feeling that is because of their dog, who they told me is 60 pounds and a big goof.

Either way, they seem to have found the best family to adopt them as possible and I couldn’t be happier. I cried after they were gone. I love my fosters as if they were my own, but as Hannah Shaw, the Kitten Lady, says, “goodbye is the goal.”